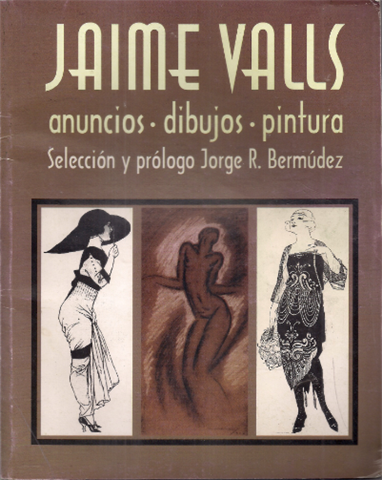 We face a truth: Jaime Valls Díaz was a pioneer of modern graphic design, an initiator of modern art in Cuba and a forerunner of Afro-Cubanism in Cuban painting, meaning that he was the first to approach with a solid production the discourse of those registered by graphic history as creators of truly Afro-Cuban works. This leads us to the conclusion that there were more than enough reasons to dedicate to him this well-earned and necessary publication.

The task of compiling the book was performed by Jorge R. Bermúdez, known to us for his prolific studies on graphics and communication. Already the title: Jaime Valls. Anuncios, dibujos, pinturas (Jaime Valls. Advertising, Drawings, Paintings), announces the illustrations we will find in the volume, a visual gallery that makes up the central part of the book, accompanied by a short text from the author as a kind of prologue and Jaime Valls’ biographica data.

Being a book of greater visual contents than text, the lack of color of the illustrations is notorious. This, however, does not attempt against the due highlighting of the formal treatment and the distinctive display of the lines in the artist’s work. The reading of a passage of another book: La caricatura contemporánea (The Contemporary Caricature), by Bernardo G. Barros, may help us confirm Jaime Valls’ compositional qualities along his career as a creator. About this particular subject the author states: The line is voluble. It adapts to the aspects. It is indeed true that the line itself constitutes the aspects. The gesture of an emotion, the horizon that captivates us, are phenomena that make an impression in one or several ways. Each way is an aspect. Each aspect is a line.” Barros tells us about what he himself coins as “the impressionism of the line”, a prominent feature in the caricatures of three Cuban artists who showed clear signs of modernity in Cuba in the first quarter of the 20th century. Among these artists, Jaime Valls stood out with very personal achievements, making use of the line and his impressionistic sense as trend that he found effective for his entire production. If we observe under this point of view the annonces, advertising illustrations, posters, drawings, and paintings gathered in this modest volume we will succeed in ignoring the inconvenience of lack of color to recognize the profound knowledge and the historical and theoretical contributions of the book written by one of the most meticulous and systematic researchers of Cuban visual culture.