Neither in Favor nor against… Exactly the Opposite 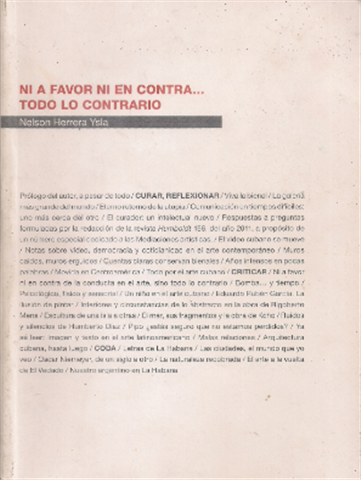 Essays written by Nelson Herrera Ysla, published in various magazines, newspapers, websites and catalogues in recent years have been compiled in this book. The title Neither in Favor nor against . . . Exactly the Opposite justifies the nature of the contents, which, according to the author, are “not in the least provocative” since they are far from the irreverent, accusational or otherwise laudatory or flattering tone used by many critics when giving evaluations. On the contrary, Nelson’s arguments, in a sober, clear and coloquial language, derive from a concern to discover the reasons that stimulate artistic creation, with a glance at the processes, at the impacts produced by these creations or at the contexts in which they take place.

Surely the author’s and editors’ decisions to include a small number of monographic reviews expresses their will to favor a more phenomenological and contextual approach. This helps to place many more valuation tools in the hands of the readers to enable them to pass judgment of the artistic-cultural events in our country and other world regions based on analyses of the causes.

Another asset of this compilation is that it clearly presents a standpoint, the way of thinking of its author. Based on all the concerns he reflects in his writings, Herrera Ysla seems to reveal to us a predominant criterion that favors the conciliation between art and life, in order to understand and correct as much as possible the complex human relations in the world today.na postura, el modo de pensar de su protagonista. Herrera Ysla parece revelarnos, a partir de todas las inquietudes que refleja en sus escritos, un criterio predominante que apuesta por la conciliación entre arte y vida, en aras de entender y corregir en lo posible las complejas relaciones humanas que se manifiestan en la actualidad.